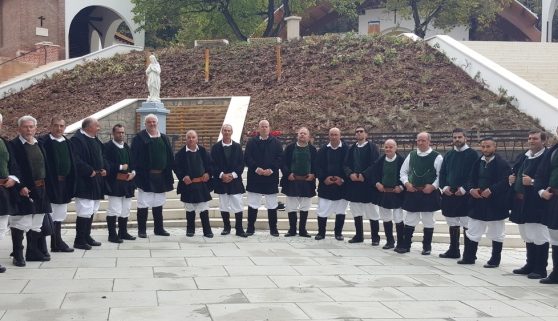 A repertoire of sacred hymns and traditional island songs was presented.

"OZIERI. A new prestigious success for the Città di Ozieri Choir, which has recently been a guest in Hungary, where it brought the island's music and culture to the 19th edition of the European Convivial Wine Song Festival in Pécs, a historic imperial city 200 kilometres from Budapest. Joining the Logudoresi were the Klapa Kastav Choir (Croatia), the Sàinguerrunde Kritzendorf Choir (Austria), the Sandvitten Male Choir (Sweden), the Kodàli Zoltan Male Choir (Budapest), the Béla Bartok Choir (Pècs), the Zengo Folk Ensemble (Pècs) and the Pannon Philharmonic Orchestra (Pècs). Special guests are the Dance Ensemble "MecseK" and the Brass Band from Pècs. The event began in the evocative, underground cellars of Villàni in the presence of a Hungarian government minister. Each group performed a song dedicated to wine, followed by touring concerts in the streets and in the cosy open cellars throughout the city. After the debut, there were more performances in the main squares of Pècs, including a live TV broadcast by the national broadcaster from the Municipal Theatre."

Want to join the discussion?
Feel free to contribute!

The Voice of Authentic Sardinia

How to find us

There are no upcoming events at this time.

The Città di Ozieri choir enchants the audience in Lausanne

Great War, the Ozieri Choir in Bassano
Scroll to top